"It isn't the mountains ahead that wear you out, it's the grain of sand
in your shoe”

How true, thought I, as I sat on my British Airways (yes, them again!) flight from London’s Heathrow Airport to Abu Dhabi, United Arab Emirates.  Two women sitting ‘aisles across’ spent the whole 6 hours complaining to the flight crew about their dinner.  So, I had two grains of sand in my shoe, for the price of one!  I wouldn’t have minded but I had paid nearly two hundred pounds to upgrade to World Traveller Plus, and the last thing I needed was two passengers who got upgraded from economy, and then complained about their food – very loudly.  The flight attendant explained patiently that yes they got an upgrade but their food didn’t, so they were given an economy vegetarian meal which they had ordered when making their reservations.  ‘Too spicy they said’, ‘this is vegan not vegetarian’, ‘that’s a bit of chicken, yuk’, and so on.  These women were obviously novice travellers and ungrateful – I always shop at Marks and Spencer (there is a handy satellite shop in Terminal 5 departures) prior to flying, so I was armed with my beef and horseradish sauce sandwich and a salmon and cream cheese one just for good measure, just in case I needed them.  I bypassed the Pringles in the departure terminal shop but that is another story!
I have visited Abu Dhabi many times (Dubai’s slightly shabbier sister) as it’s an ideal short break as the flying time is only around 6 hours 30 minutes from London, and hot weather is guaranteed all year round.  Abu Dhabi is one of 7 ‘emirates’, or states, which also include Dubai, Fujairah, Sharjah, Ajman, Ras al-Kaimah and Umm al-Quwain.  One rarely comes into contact with the locals as apart from oil, it’s primarily an economy based on tourism, although it isn’t as busy as Dubai, which is another reason why I like it there. 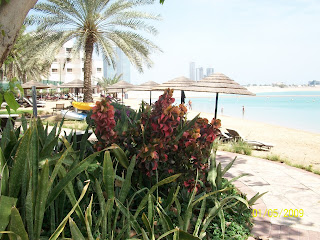 My first 3 nights were spent at the Crowne Plaza Hotel on Yas Island, as they were free with my British Airways frequent flyer points (there is NO other reason to fly BA these days).  Yas Island is close to the airport, or it would be as long as you don’t get a taxi driver who has just arrived from Nepal 11 days earlier and informed me ‘I am new, I don’t know my way’!  Okay well that explains why he stopped in the middle of the highway and asked a taxi driver buddy how to get to Yas Island.  We got there in the end although I was a bit worried, but he was really a very sweet guy – I tipped him well as although tips are not expected in Abu Dhabi, I felt sorry for him and he did a grand job.  I always chuckle though when I arrive at the airport, and go to the taxi rank to be greeted with ‘Madam, taxi or limousine’!  It’s a taxi every time for me I’m afraid.  Yas Island is most famous for its Grand Prix Formula I racing circuit but not being into motor-racing, that holds little interest for me. 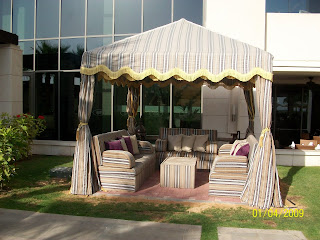 My stay at the Crowne Plaza was restful and uneventful.  The hotel has a courtesy bus to Marina shopping mall twice a day which is well worth the trip, if you like shopping.  It takes around 50 minutes each way but if you go in daylight, you get to drive right through the city and get a fantastic view of the fabulous Sheikh Zayed Grand Mosque – a spectacular piece of architecture constructed with 1,000 columns and 82 domes.  Unfortunately, the bus was going too fast for me to take a decent photo.  I haven’t visited this mosque but it has been open since 2007 for public tours and is apparently one of the few mosques open to non-Muslims.  Beach gear is okay around the hotels resorts, but in public one must wear more modest clothes, and in mosques, cover-ups are essential. 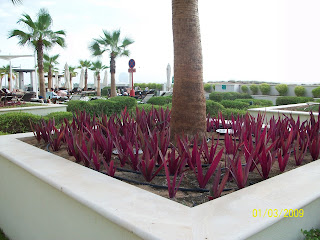 Marina Mall consists of 300 shops and an ice-skating rink (go figure!) but there is still a lot of construction going on around the mall and throughout the city.  The highways have really improved, even since I was there last November, and journeys throughout the city are much quicker so the inconveniences have paid off.  Taxis are cheap compared to London prices and the buses appear reasonable and clean also.  The mall has lots of restaurants and I had a really nice meal in a coffee shop there.  I shan’t talk about the money I spent in the shops (that will remain our secret!). 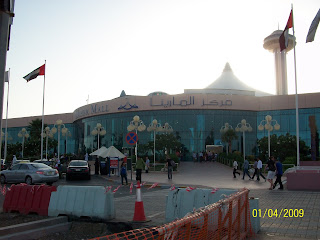 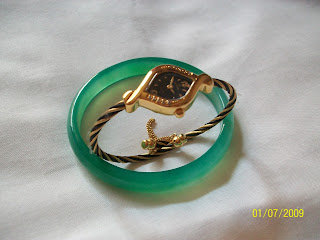 I then moved to Le Meridien Hotel, the other side of the city, which is an old favourite of mine, located next to the Corniche – locals walk out in the cool of the evening to relax along the Corniche which is 8 kms long and runs parallel to the water’s edge.  Le Meridien is like an old slipper, a bit shabby but comfortable and familiar.  The company do plan a complete refurbishment of their hotels with plans to upgrade them, but I wasn’t expecting this to be going on whilst I was there, and it was a bit noisy with construction by the pool area.  But once I am wafted away on a sunbed into dreamland, with half a pint of Fosters, I don’t really notice the noise too much.  Alas they had no available smoking rooms, and even more alas, I had to pay 35 pounds for an upgrade to get a smoking room.  It was worth the money as the upgrade came with lots of freebies, like breakfast, and access to the Royal Club Lounge with free drinks and canapés and snacks throughout the day.  They also provided plastic cups in the room so I could make a cup of tea and take it to the pool (I am just so classy sometimes).  Well it saved me 4 pounds which is what a pot of tea costs! 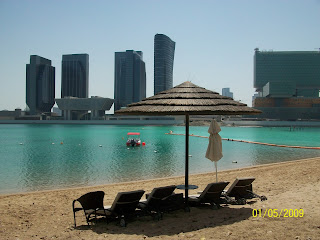 There is much fine dining to be had in Abu Dhabi, as it is true for throughout the Middle East.  The best chefs are hired into the area and the food can be very opulent and a bit over-the-top.  Historically, the people of the Arabian Peninsula were limited to dates, wheat, barley and a little meat if they could find it (I read that in a book!).  Possibly deer meat as it's thought Abu Dhabi can be translated as 'father of deer'.  Personally, I have simple food tastes,  am not very adventurous and had the best melt-in-your-mouth cheeseburger ever with Le Meridien room service. 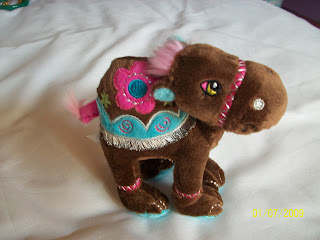 The flight back was uneventful although I almost got knocked down in the aisle by a British Airways flight attendant. These people have such an attitude and don’t seem to realise that passengers pay for their salaries.  But overall, I had a nice, relaxing time and shook those grains of sand outta my shoes pretty quickly.  One word of warning, couples can hold hands but no kissing or hugging in public otherwise you might get arrested (seriously - the locals find it offensive).  It is not recommended to show the soles of your feet in public, either, because that is seriously offensive also.  A young girl came into my hotel whilst I was checking out scantily dressed looking for a club to go to.  Not only would I expect her to get arrested but all the hotel staff came out to stare - I was really embarassed for her!  When in Rome....oops sorry, it was Abu Dhabi not Rome but you know what I mean!