Borneo – it conjures up images of rainforests, longboats and orang-utans (‘men-of-the-forest’) and it really lives up to its image.  Borneo is split between the nations of Indonesia, Malaysia and Brunei although when I think of it, it is the Malaysian split of the island that comes to the fore as I had visited  first many years ago this part of the island.


The highlights then included visiting the state of Sabah in the north, and the Sepilok orang-utan rehabilitation sanctuary, where it was so amazing to get so close to these amazingly intelligent animals.  I also recall wanting to climb Mount Kinabalu but altitude sickness got the better of me, and I could only manage the botanical gardens situated at the base of the mountain.  However, it was a particularly beautiful part of the country, and I have to be satisfied climbing the mountain only in my dreams!


So, I was long overdue another trip and set off with excitement and trepidation in January 2013 for a week’s stay, this time in Kota Kinabalu.


I call this trip the ‘trip of upgrades’ as this is what I encountered throughout the journey.  I flew out of London’s Heathrow Airport on Cathay Pacific Airways, via Hong Kong, in premium economy.  I decided to pay for the upgrade in order to get some sleep and rest as it’s around a 12 hour flight.  I also call this trip the ‘trip of the missing Pringles’, which remains a mystery to this day.  Prior to boarding the flight, I had bought my duty free, a book, a packet of polo mints and a small carton of Pringles.  I KNOW that carton of Pringles was full and sealed.


The flight passed uneventfully until I woke with a start around 8 hours into the flight feeling a bit peckish.  Ha! I thought – I will dip into my carton of Pringles.  Well what do you know – I found the carton and it was empty!  The seal was off and there were NO Pringles left!  Who ate my Pringles?  Did I awake and sleepwalk into the Pringles or did another hungry passenger polish them off?  To this day I don’t know what happened – I only know the box was empty.  Hmmmm I thought – is this a bad start to my trip!  If I can’t look after my food, how will I cope looking after myself.  It must be age, thought I.


Anyway, after arriving in Hong Kong and overnighting at my favourite on-campus hotel, the SkyCity Marriott, I flew onwards on Dragonair to Kota Kinabalu.  I was pretty exhausted so by the time I arrive at my hotel, Le Meridien, I was tired, dusty, thirsty and busting for a cigarette.  But alas, the hotel had no smoking rooms available.  Oh please I said to the receptionist, I MUST have a smoking room, is there anything you can do.  Oh ‘no’ she replied, we have nothing to offer.  Oh please said I, you MUST be able to do something, and after some 10 minutes of checking and disappearing to the inner office, she managed to offer me an upgrade to a smoking sea-view room, with a fabulous view, at no extra costs.  I LOVE Le Meridien! 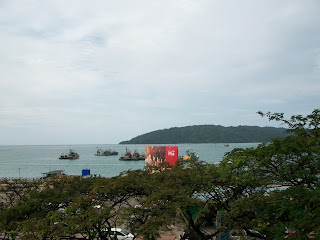 This was my first visit to KK (as they call it) and it was fascinating to watch the fishing boats go out in the morning and then return at sunset with their ‘catch of the day’.  Despite the modernity encroaching KK it still retains its charm and authenticity which is more than I can say for KL (Kuala Lumpar) these days.


Malaysia has a fascinating history having been invaded by both the Dutch and the British at one time or another.  A taxi driver once told me how much they had loved the British invasion, because despite the ‘colonisation’, the British gave something back in terms of an investment in the country and local people, and this had always been appreciated.


I spent most of the time relaxing by the pool (as I do) and shopping (as I also do!).  My colleagues always look forward to my shopping trips abroad more than I do!  No handbags this time but I did splash out on a few clothes and gifts for others.  The shops were a hop, skip and a jump from the hotel which was in a prime city location.


Since I had done the usual sightseeing on a previous trip, I only took one excursion.  This was to the new nature reserve attached to the Shangri-la Rasa Ria Hotel. 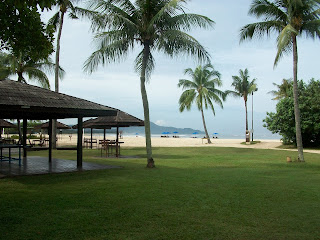 12 years ago this nature reserve was created, and used as an additional rehabilitation home for young, orphaned orang-utans.  At present they only had 3 or 4 in residence.  They do sterling work at this reserve and the babies stay 3 or 4 years, and then are transferred to Sepilok up north, where they continue the rehabilitation process for a further few years, before they are released back into the natural rainforest.  The hotel is set in a beautiful location, the rangers are so hospitable and knowledgeable, and are wonderful with the orang-utans.  Well worth a visit if you can’t get up to Sepilok. 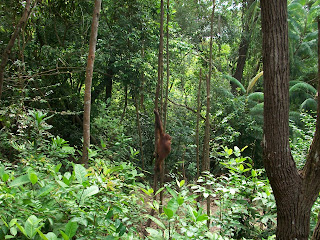 I headed back to Hong Kong after a wonderfully relaxing 5 days via KK airport.  I got into Hong Kong really late and made my way to the trusty SkyCity Marriott Hotel, but alas, they had no smoking rooms.  Again, it was ‘oh please you must have a smoking room’.  But all I received was a firm ‘no’.  ‘But I am a regular at this hotel, you MUST have something?.  ‘Madam I will check again – oh we have just had a check-out but the room is dirty(!)’.  ‘That’s okay’, said I  - I can ‘do dirty’!.  The receptionist went off and had a chat with his buddy, and then returned and said:  ‘Madam, since you are willing to take a dirty room I can offer you a suite where you can smoke at no extra charge!’.  Well you couldn’t stop me for Pringles!  Thank you KENNETH of the SkyCity Marriott – you gave me a suite at no-cost and were absolutely wonderful.  I got up the room and ran from bathroom to bathroom (and christened both) to make sure I made the most of my SUITE!  Pity I was only there 7 hours before check-out but it was 7 hours of bliss!


It didn’t end there.  The upgrade to surpass all upgrades came on my return Cathay Pacific flight from Hong Kong to London’s Heathrow Airport.  At the boarding gate, the machine bleeped RED when my boarding pass was entered and the agent shouted ‘SEAT CHANGE, SEAT CHANGE’.  I groaned and wondered what had happened – she pointed to my boarding pass and she had upgraded me to BUSINESS CLASS.  Well, a sumptuous breakfast, 2 glasses of delicious red wine (and a tiny brandy) and I was of the in the land of zzzzzzzzs for the rest of the flight back.  Not sure why I got so lucky but THANK YOU Cathay Pacific.


I never did figure out what happened to my Pringles!


There is a lot to see, and experience, in Borneo (the third largest island in the world) – a jewel in the crown of Malaysia, with its own heritage, and indigenous tribes and an interesting colonial past.  It gained independence in 1957.  The uniqueness of the orang-utans are truly amazing and they love an audience! 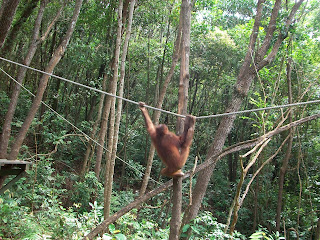 Research it well as it has a monsoon season with much rainfall.  If you like just to chill and sunbathe, I have found the best time to go there is in March, and combine sightseeing with a resort island such as Penang or Langkawi.  Happy exploring!