“The man who goes alone can start today; but he who travels with another must wait till that other is ready.” – Henry David Thoreau


Well, I have never been one to wait for others.  If I had, I would never have seen as much of the world as I have!  I have visited Morocco three times (so I thought), and each time has been a completely different and unique experience.


The first time was in the late 80s, feeling worn out by the British winter, I entered a Thomas Cook office and said ‘whisk me away to a warm place’.  Well, perhaps they weren’t the exact words but you get my meaning!  It’s the first, and only, time I have ever let a travel agent choose a destination for me but it was certainly worth it.  I ended up flying to Morocco and ended up in a resort called Port Kantaoui, a very popular destination for Western travellers.  I was completely unimpressed by the hotel but had a chest infection so wasn’t really that bothered.  I remember gasping for breath as I boarded the flight from London Gatwick, in the fog, and was just glad to arrive in one piece!  I had never experienced such a fog since the 1960s in London.  When I double-checked my facts I realised Port Kantaoui is actually in Tunisia, not Morocco, so it goes to show how memory can fade, and get it wrong, so these blogs are becoming really important for my sanity.


On arrival, at the first opportunity, I found a pharmacy which sold me the most wonderful, strong, cough medicine so I felt 100% better within a couple of days.  It was January, so the weather was fairly warm in the daytime, but freezing cold at night.


I took a tour through the amazing pink Atlas Mountains (which span Morocco, Tunisia and Algeria), and had lunch in a restaurant carved out the side of a cave.  We also visited a Berber home dug into the mountains.  I knew the home was on show for the tourists but it was still amazing to get a taste of desert dwellings.  It is said the Berbers can be traced back to the Ancient Egyptians.  The real highlight, however, was a two day trip down to the edge of the Sahara.  Watching the sunrise at 7am over the Sahara desert was one of the most incredible experiences I have ever had.


The FIRST time, then, I went to Morocco was a couple of years ago.  I took a trip to Agadir, and stayed in the wonderful Sofitel Hotel – pictured below. 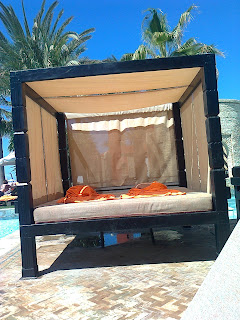 On this trip I had the good fortune to visit a local family for tea.  Somebody on the same flight as me approached me at the pool of the Sofitel and invited me to meet her ex-boyfriend, and his family.  Not one to turn down a good opportunity, I gratefully accepted.  We were picked up at the hotel and driven (and I use the word loosely!) to a little suburb about 10 minutes from Agadir.  The family were so welcoming and had put on a feast to welcome the visitors.  We had great fun with my camera taking photos and showing the family the results, as they had never seen a digital camera before.  The extended family living in the house ranged from about 3 years to 60++, although Grandad didn’t know how old he was.  However, I was nearly lost to the world, as I wandered outside and down the street for a cigarette.  The streets have no signs, nor names, and I couldn’t find my way back.  They almost had to send out a search party for me, but eventually I made it back to the house.  The locals were laughing at me [but that’s okay] because everybody I asked didn’t understand my English and I don’t speak the local dialect.  But they were friendly and laughing in a nice way!  The moral of the story is if you go for a walk in the suburbs, leave a trail of breadcrumbs otherwise you won’t find your way back. 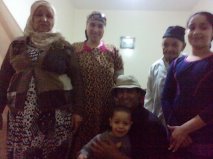 The host family explained through the ex-boyfriend, that once somebody from the house becomes an adult, the family built an extra room on top of the house so the adult can have some privacy.  So they build up, not out, when needed.
Tree goats: 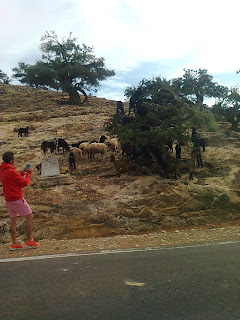 I also visited ‘Old Mogador’, now known by its traditional name of Essaouria.  This was a couple of hours drive from Agadir and a frequent haunt in the 1960s of The Beatles and Jimi Hendrix, amongst others.  As the tour guide said, ‘lots of cannabis, and no police’ in those days!  This is a beautiful, little, port city, on the Atlantic coast.  Charming and pretty [see below], with narrow streets and armed with cannons, we had a fabulous lunch on the outside of the city walls. 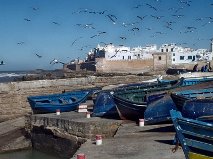 We won’t mention the horse-ride in this blog [the horse was bigger than me, and feistier, and it was probably the worst decision of my life to try to recreate my love of horse-riding when I was 11!].


The SECOND trip, to Morocco was last year, when I took an Explore tour to Tangiers, Chefchaouen, Fes, Rabat and Marrakesh.  I had always want to ‘ride’ the Marrakesh Express, ever since I heard the Crosby, Stills and Nash song many years ago………….’all aboard……..’


Tangiers conjured up memories of reading one my favourite authors, Jack Kerouac [‘On the Road’ and many other books].  Tangiers would have changed since the 1950s when it was visited by the ‘beat generation’:  Kerouac, Borroughs, Ginsberg et al.  I imagined dark and seedy but it was completely the opposite – clean and pretty.  We stopped for coffee in the central square of the medina, and watched the world go by.  Tangiers has moved on, of course, from the 1950s, and we were only there for one night. The flight out via Casablanca, from London, wasn’t without humour though.  I was looking for a smoking area at Casablanca airport and there isn’t one.  Well, after harassing several people asking about the non-existent smoking area, an airport cleaner led me away to a staircase corner and invited me to smoke there.  So I did!  Illegally!  Although initially he led me to the male facilities before I realised we had had a bit of a misunderstanding!  My Arabic is non-existent and my French rather poor.


From Tangiers, we went to Chefchaouen, founded in 1471, a charming Andulucian walled town where all the buildings are painted blue, in the Rif Mountains.  It was a long and dusty coach ride but well worth it.  You will have to go there to discover the story behind the blue buildings.  We had the most wonderful local tour guide who informed us he was a global celebrity [we will have to take his word for it], and he was informative and funny.  It was raining whilst I was there and very slippery on the streets.  One of my co-travellers instructed me on how not to slip, when ouch she slipped herself.  Still, she was just trying to be helpful! 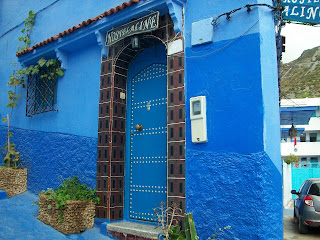 From there we went to Fes [Fez] which allegedly has the biggest medina in Morocco.  This was the most commercial part of the tour, as we visited a leather factory and a scarf factory [very good value and beautiful scarves], and had the most wonderful lunch in a restaurant inside the medina.  The picture below is a kitten in the one of walls of the souk hiding out!  There is no way one could find one’s way around the medina without a guide as it is huge and very winding. 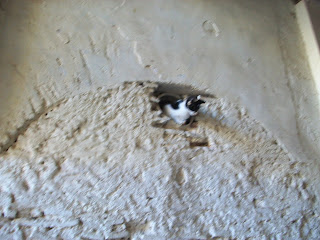 Then it was on to Rabat, the capital of Morocco.  This was a big surprise.  The further on in the journey, the warmer it got and by the time we arrived in Rabat it was sweltering, and we were all dressed in warm clothes.  Although our suitcases were taken on to the hotel, we had to trawl around Rabat over-dressed and with our hand luggage.  It was exhausting but worthwhile – it has an Islamic and French influence, Morocco having been a French colony.  It is famous for the Hassan Tower, which is a 12th century minaret, amongst other amazing sights to see.  The coastline is particularly pretty as you can see below. 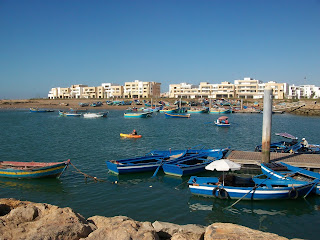 After a night in Rabat it was onwards to Marrakesh by train.  Now, heed my warning.  If you are with a group stay close to the guide.  I didn’t and almost ended up taking the wrong train at the wrong time, and arriving in Marrakesh way before the group.  I just went to get a cup of coffee at the train station, and all of a sudden the group disappeared.  I went running down to the platform, thinking I had missed the train, and if it hadn’t been for the helpfulness of the locals, who realised what a complete idiot I was, I would have been no doubt lost forever.  They directed me back to the main station and eventually I found the group.  The phrase 'mad dogs and Englishmen [people] came to mind.  Hot and sweaty we boarded the Marrakesh Express which wasn’t at all an express and took forever to get to Marrakesh!


It was a really nice journey though, comfortable and airy.  The only problem was that people kept getting on the train insisting we were in their seats.  If it hadn’t been for the tour guide, we would all have been tossed out of our seats.  As it transpired, the guide said this is normal (!).  Travellers either get on the wrong train or are in the wrong part of the train, so they try to take your seat without realising they are in the wrong!  One word of warning if you are a smoker – don’t!  You have to go to the area between the carriages to smoke, and on one such smoke-break I almost got sucked out of the train when the door suddenly flew open.  Not sure why people laughed, as it was the most scary moment of my life!  [Apart from the horse-ride, that is].


Marrakesh was a bit of a disappointment.  I am not sure what I was expecting but basically it is one large medina, with lots of shops and hotels and not much else.  It really comes alive at night with lots of restaurants and acrobatics.  We did find an amazing bar outside the medina where we whiled away some time.  Marrakesh does have the Yves St Laurent gardens, outside the medina, which are supposed to be beautiful, but I never made it there.  I was with two others in the group and we heard a restaurant [serving alcohol] calling our name so we had lunch there instead! 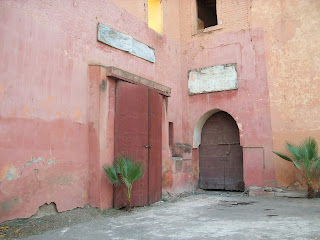 Obviously there is a lot more to this trip than I have revealed.  Morocco is a fascinating country with a really interesting history – but you must go and discover it yourself!