‘To move, to breathe, to fly, to float,
To gain all while you give,
To roam the roads of lands remote,
To travel is to live’;   Hans Christian Andersen

The ‘pink city’ of Petra in a land remote had long been on my bucket list.  Long before the phrase had ever been coined.  Thus, in 2005, I found myself booking a small group Kuoni tour to Jordan, which took in Amman, Petra and Aqaba via the Wadi Rum and the Dead Sea (Jordan side).  This was one of the best trips I have ever taken.  Only 4 in the group plus a driver and guide in one massive four wheel drive.  The photos are not great quality because they are photos of photos.


There have been ‘troubles’ in Jordan since this time, so I am really glad I took the opportunity to travel there when I did.  It was a decision between Jordan, and, Syria.  Syria was on the rise as a traveller’s destination and now it too late for me to go with the current problems.  However, I have no regrets about choosing Jordan.


We flew from London to Amman and were welcomed by our guide on arrival.  There was another couple on the tour.  They had visited more than 80 countries (more than me, so I was impressed), and were avid bird watchers, one other traveller, and me.  We all got along really well, which was helpful considering there were 6 of us tightly squeezed into one car.


Amman is the capital of Jordan and is most famous for its Roman ruins (further north in Jerash), particularly the Roman Theatre, which is still used on occasions. 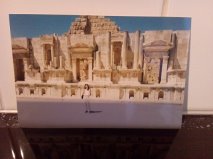 We also came across the most beautiful Greek Orthodox Church, which was simple but absolutely stunning. 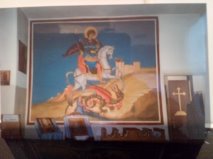 We visited the Dead Sea on the way from Amman to Petra, and that was truly a unique experience.  It isn’t true, however, that you can float without aid because of the salt water.  I floated for a while but found it quite difficult not to stop my legs from dropping down, so it’s a bit of a myth.  Or maybe that was just my experience.  However, don’t forget to pack a swimsuit and towel as it’s really worth a try and isn’t the most usual travel experience on offer!


Of course Petra was the real highlight, and there are no words or photographs to really capture its essence, unless you have a camera that can film a panoramic view.  The entrance to Petra was used in one of the Indiana Jones movies, although I cringe to think about how much damage may have been done to the infra-structure, using it as a movie set.  Petra is a UNESCO World Heritage site, and when I was there, there were still people living there as the government had been unable to entice them out of their homes.
Carved out of red-rose sandstone from a sheer rock face, Petra is one of the 7 modern wonders of the world, and is truly breath-taking – an archaeological icon.  There was only a basic restaurant there when I visited, although I expect facilities have improved.   There was an amazing bathroom facility carved into the stone which I can honestly say housed the most beautiful, Western bathrooms I have ever visited.  And I have visited a few – I was thinking of writing a book once:  toilets of the world I have visited!  This was the best.  Bugis Street, in Singapore, in 1979, was the worst! 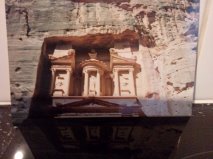 Any decent guide book or a ‘google’ will tell you more about Petra, but for me the highlight was taking a donkey up the rock face.  I was with the other single traveller and our donkeys were called Jack and Mike.  They were well looked after and they well looked after us, even as we edged towards a precipice in the rock face.  I really thought I was going to be tossed over the edge to death but the donkeys are sure-footed and well used to the climb.  Coming down on foot though was another matter, as I am not sure-footed and a bit clumsy, so I half walked, half slid down to the bottom, but it was such great fun.  Camels are available to take you back from base to your hotel via the entrance to Petra, but we chose to walk back to the Hilton Hotel.  Probably the worst decision ever, since it was burning hot, took an hour and we hadn’t eaten lunch.  We returned to the hotel at 3pm and flopped in the bar for a cool beer and something to eat. 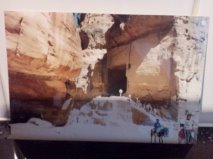 From Petra, it was onwards to Aqaba via the Wadi Rum (Rum Valley).  This was another amazing experience.  This is the largest valley in Jordan, not far from Aqaba.  It contains the famous 7 Pillars of Wisdom and rock-faces that are popular attractions for rock-climbing for tourists, so we were reliably informed.   It all looked pretty dangerous to me but it was interesting exploring the nooks and crannies of the valley, with its pink rock.  My white designer jeans never recovered, and I had to throw them away because the pink dust could never be washed out!


According to Wikipedia, it’s a popular site for movies to be made particularly those involving film sets that require a setting for science fiction scenes of Mars (!).  Of course the most famous movie shot in this area was ‘Lawrence of Arabia’ [1962].


The only disappointment on the whole trip was stopping by a restaurant for lunch.  The lunch was huge and appetising and only cost 8 British pounds at the time.  It was really good value.  There was far too much food though (we couldn’t choose and were just presented with the food), and afterwards we found out that whatever was left was given to the poor around the area.  I don’t have a problem with this, but I do have a problem with not having a choice.   I would much rather have spent less, as I don’t eat much, and then be invited to contribute to feeding poorer locals, but we felt rather duped.


It was then onwards to Aqaba, a popular beach and scuba diving resort on the Red Sea.  Here I had the most unique experience of being able to stand in one spot at a border crossing, and see Kuwait and Israel whilst still being in Jordan.  It’s not often one gets to see 3 countries at once from one spot!


Regrets?  I have a few, but I did it my way and saw Jordan instead of Syria.  I hope one day Syria can go back on my bucket list.  In the meantime, Petra is a ‘must-do’!  Enjoy.