Cuba is one of the most interesting countries I have ever travelled to in recent times.  Embargoed by most of the known world, it's creativity is humbling, retaining charm and quaintness particularly outside of Havana, it's capital.

I took an 8 day trip flying out from London on Virgin Atlantic.  In future I will give this airline a miss although it made a change to be offered sausage and mash for lunch, instead of the usual 'chicken or beef' options!


I wasn't sure what to expect on arriving in Havana but going through customs and immigration was a breeze - I was carrying Marlboro cigarettes and being an American brand, was worried but there were no concerns raised.  Our tour guide told us that Americans are welcome in Cuba although the U.S. administration would take a dim view if discovered.  This was new information for me.  I had tried to get to Cuba from Mexico in 1989 but wasn't able to give the tour company enough notice so Cuba had remained on my 'must travel list' for many years.  Interestingly, two of the most revered men in Cuba are not even Cuban:  Ernest Hemingway and Ernesto 'Che' Guevara.

I stayed at the famous (or should I say 'infamous') hotel Nacional De Cuba whose guests in the past have included Winston Churchill.  Castro made sure the hotel 'cleaned up it's act' in relation to past reputation (you'll have to go to learn more!), but it retains it's charm.

To save money I always take food in my suitcase for the first night so whilst others on the tour dined on mojito cocktails, I tucked into crackers and salmon paste, followed by a Cadbury's chocolate bar for dessert!
﻿
﻿
﻿ ﻿

Mojitas, Ron Collins (it's a cocktail - get with it!), cubre libra, Fidel Castro, vintage 1950s cars, Trinidad de Cuba, savonne (soap), a communist country with a Latin American twist (makes it a bit of an illogical country by their own admission!), Ernest (Hemingway) and Ernesto ('Che') (stay with me here...), Jose Marti, systematic legalised hitchhiking system, 'you don't come to Cuba for the food', convertible pesos, Havana cigars, Breezes Jicaboa Resort (one breeze too many for me!), shredded beef - no pleeze no more shredded beef!, mozzies, Bay of Pigs, England swapping Cuba with the Spanish for Florida (during colonial days), go before Castro dies because there will be big changes;   don't mention the Bicardi family (persona non-grata in Cuba these days), Guantanamo Bay (the US pays just over 4000 dollars annual rental into a Swiss bank account for the Bay but the Cubans don't touch it - well they only touched it once but they were desperate!); Guantanamera (should be familiar to all you girl guides, brownies and scouts out there!), the Cuban Missile crisis, the A1 motorway - the Russians said you don't need a motorway, the Cubans said yes we want to rival the highways of the world, the Russians said 'no, oh okay then', so they started to build one, but after sometime the Cubans realised they didn't need one as they have no cars virtually outside of Havana!


Travelling across the central zone of Cuba, one of my favourite places was Trinidad de Cuba - picture postcard perfect - cobbled streets and charming, colonial buildings:

﻿
﻿
You may, or may not, be a fan of Cuban art but one of the most impressive outdoor space views is a reproduction in art form of the results of Che Guevara et al blowing up a train on a track around the Santa Clara area: 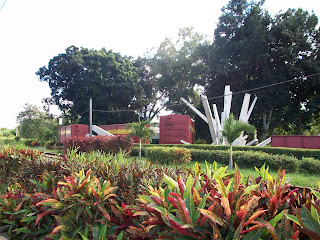 The Cubans are very proud of their healthcare system to the point that they produce numerous doctors (and lawyers).  The plus part is they can trade 'doctors for oil' with Venezuela, but the 'downside' is that the doctors and lawyers are on minimum wage.  Many are giving up their professions to become porters and bell-boys because they can earn more in tips than in salaried wages as professionals.  In my view an economic necessity for many Cubans but a waste of potential and intelligence.  But we all have to find a way to survive the best way we can.

My trip encompassed Havana, Santa Clara, Sancti Spiritus, Cienfuegos and Trinidad de Cuba (not to be confused with Trinidad & Tobago which are separate islands/countries), and finished with a night at the Breezes Jicaboa Resort.  I would give this resort a miss in the future as although it was set in beautiful grounds, it lives up to it's name.  One of the hotel staff told me the resort is breeze-free only 1 day in every 14 and it's REALLY breezy - but that might be your thing!


﻿
﻿
I travelled on a small group tour with The Travel Collection - this brand no longer exists but is part of the main Kuoni brand which now has the Kuoni 'Light' brand.  The tour guide was excellent and had had the good fortune to have been able to travel to England and France himself, so he was able talk about comparisons with personal experience between Cuba and Europe.

I don't want to give too much away about Cuba as it's a hidden gem - go find out for yourself.  Enjoy!