“Travel makes one modest. You see what a tiny place you occupy in the world.” – Gustave Flaubert


This travel quote rings so true – the more one travels, the more one realizes what a tiny space in the world each of us take up.  A trip to Myanmar (previously known as Burma) had been ingrained in my psyche for as long as I can remember.  I can’t quite figure out why some countries ‘pull me’ to visit, and yet others don’t.  Perhaps it is part of some kind of universal unconsciousness which ‘taps’ into my genetic inheritance coupled to what I was exposed to as a child.


For me, Burma, as it was known then, was linked to the World War 2, and the building of the Thai-Burma railway in 1942-43, and hearing stories about it as I was growing up.  The purpose of the railway was to allow the Japanese to move supplies, during the war, avoiding sea routes, in order to attack the British in India.  I was also influenced by the famous movie ‘Bridge on the River Kwai’, released in 1957, which I watched many times [you need to see it to understand the link].


However, on further researching this, it seems the British-Burma connection goes way back to the 1790s, when there was a British trading station in the country.  Although Burma became independent in 1948, it had been under British rule for nearly 100 years.


Myanmar has always been a really expensive country to travel to from the United Kingdom, so it was a long time before I could afford to go.  There have also been tremendous ethical issues about travel there, so it played on my conscience for a very long time.  This was due to the local government military regime and the house-arrest for 21 years as a political prisoner of Aung San Suu Kyi.  You can google her if you are not familiar with the political situation.


In October 2013, I decided to take a trip with Exodus, a global travel company, who provides 'ethical tours', because since 2011, it had become a more popular destination and prices were rising.  As a country becomes more developed for tourism and infra-structure improves, it becomes less authentic in my opinion.  The trip from London took in Yangon (Rangoon), a flight to Bagan (Pagan), a 10 hour boat trip down the Irrawaddy River to Mandalay, and finished off with trips to U-Bein Bridge [built in 1850 and thought to be the longest teak made bridge in the world], Lake Inle, then back to Yangon [pictured below]. 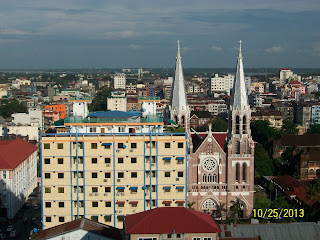 The group was small, and all started well, although I got the impression that in Yangon there was much more to see, but we weren’t allowed to see it.  Perhaps, that’s just me being a paranoid!  The hotel and transport standards were average and pretty much what I expected for a new developing destination for travellers.


We were taken to a number of temples and stupas in Bagan, and I was a bit ‘stupa’d’ out by the end of it.  It was the end of the rainy season and you are not allowed to wear any footwear, including socks in or around the temples, so it can be very slippery.  The rainwater was warm though and not too uncomfortable, and some the temples were well worth seeing.  The difference between a temple and a stupa is that stupas are solid so there is no entrance.  There must have been a full moon the night before, because on the morning flight to Bagan, one of the group members yelled at me because she hit her head on the overhead bin on the flight.  I wasn't anywhere near her but with group travel you don't get to choose your travelling companions!  I managed to avoid her for the rest of the trip. 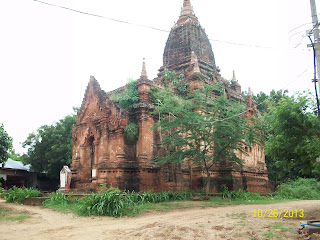 Unfortunately, I got sick in Bagan and after a night of torrential rain and no sleep, we got on a boat for the 10 hour trip to Mandalay.  The boat served breakfast which I missed as I slept for most of the journey, but it was easy to stretch out and rest on the lower deck.  Most of the group were on the upper deck, and I did manage to join them for a short while before we got to Mandalay.  Mandalay used to be the capital of the country, but we didn’t get to see the palace, which would have been amazing.  Mandalay still has a real colonial feel to it.  The bus driver and guide were fantastic because they stopped the coach on the way to the hotel so I could buy antibiotics from a street-seller, guiding through me the mad traffic – it seems we had arrived in the middle of the evening rush-hour! 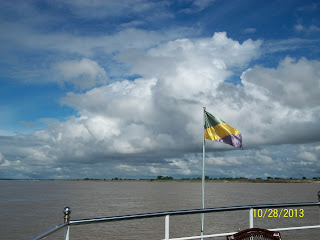 I missed what everyone said was the highlight of the tour – a trip to Lake Inle – as I was sleeping off the virus I had picked up, but I was fine the next day.  Yes, that picture of a fisherman on the front of the Lonely Planet guide is the real deal.  A group member took a similar picture and e-mailed it to us after we returned to the UK.  I discovered, later, though, that the fishermen stand on one leg just for the tourists, and expect a tip, so that was a disappointing!  Maybe I could go to central London and stand on one leg for the tips to fund my next trip – what a good idea! 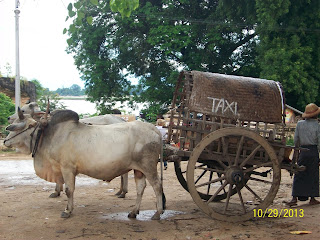 I enjoyed most of the trip in a country I had wanted to visit for so many years, and won’t reveal too much because you need to find out for yourself.  I suspect, though, there is far more to see than we were able to.  Either it’s an infra-structure problem or the government really doesn’t want too many people poking around.  The local people we came into contact with were warm and friendly, but I would have liked the opportunity to meet and chat to more.


Nearly 3 years on, it would be interesting to hear from anyone who has been recently and compare experiences.  Happy travels!