“Man cannot discover new oceans unless he has the courage to lose sight of the shore.” – Andre Gide


I discovered a new kind of ocean visiting Nepal – the amazing Himalayan mountain range.  Again, the true essence of Nepal is impossible to capture in words and photos.  You have to be there to really appreciate it.  I first visited Nepal in the mid-1990s, when I was based in India for 6 months for work.  I knew I would have to revisit for two reasons.  Firstly, I was staying in a really basic hotel, and had heard there was a hotel in Kathmandu called the ‘Yak and Yeti’.  I couldn’t leave this earth without staying in a hotel with such a wonderful name.  Secondly, on the flight from Kathmandu to Calcutta, I lost my complete roll of film, in the aeroplane overhead locker, of the mountain range.  I vowed to return again, which I did around 8 years ago.
Since I have no digital photos, we have to make do with photos of some of the postcards that I bought.  I figured they would come in useful one day!
Kathmandu, the capital of Nepal, was part of a one week trip which included Calcutta and Goa, when I was based in Mumbai (Bombay).  I was only there for 3 days and so had limited time.  I was taken around Kathmandu, which, amongst other things is famous for its stupas (temples which are solid and cannot be entered).  The most well-known and ancient Buddhist shrine stupa is the Swayambhu Stupa (the Monkey Temple).  On each side is a huge pair of eyes representing the all-seeing perspective of God.  Wherever you walk, the eyes seem to follow you.

The river running through Kathmandu is used for people to wash, and for mourners to lay the dead for funeral pyres.  This was the first time I had ever seen a funeral pyre, and it was really moving.  The bodies are washed in the river and then have cloths laid over them before burning them.  I was across the other side of the river, so wasn’t amongst the mourners.  It felt a bit disrespectful taking photographs but funeral pyres are a normal part of life in the area (forgive the pun!), and there were no protests about taking pictures.


Kathmandu has a main square called Durbar (Royal Palace) Square which is now a UNESCO World Heritage Site, and still an important centre for royal events.

Of course, the main highlight of this short trip was being taken to a restaurant in the terraces leading up to the Himalayas mountain range.  Although I didn’t see Everest, I was smack-bang having lunch in front of Annapurna.  Sitting there with a beer, I felt at one with the mountain, as if I was being sucked into its very core.  On returning to the UK, someone said I must have been suffering altitude sickness but that isn’t what altitude sickness feels like.  I experienced that at Mount Kinabalu, in Borneo.  Facing Annapurna was more like experiencing some kind of spiritual phenomena where I felt part of the natural landscape.  It was the most unusual experience. 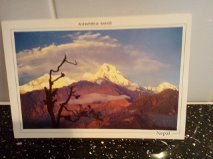 Unfortunately, due to bad weather, my flight tour around Mount Everest was cancelled (and it cost 100 British pounds which was non-refundable).  So beware, and try to ensure that weather conditions are reasonable enough for the aircraft to take off if you book that tour.  Although things may have changed since I was there!  I had to make do with a postcard.

On my second trip to Nepal, again we visited Kathmandu as part of the tour.  We also visited Pokhara, the second largest city in Nepal.  We didn’t get as close to the Himalayas as I did the first time, but the view from the hotel of the mountains was spectacular.  We stayed in a hotel that consisted of small cabins which were centrally heated (it was pretty cold), and was a short walk into town.
Unfortunately, our flight from Pokhara back to Kathmandu was delayed by several hours because of an aircraft malfunction.  We weren’t told until we were in the departure lounge, so had to hang around for 4-5 hours with absolutely nothing to do.  I made friends with the security guards though, who allowed me to go back and forth from the lounge to the check-in area for occasional cigarettes!  Since I was the only smoker on the tour, I was very grateful.  The aircraft part required had to be flown in from Kathmandu, but better that, then take off with a technical issue, never to be seen again!
I never did get to stay in the Yak and Yeti hotel.  I guess that means that one day I will have to return!