‘A garden of flowers surrounded by the sea’


This was my second trip to Jersey in the last 12 months.  Jersey is part of the British Channel Islands, just 30 minutes by air from London’s Gatwick Airport.  Allegedly it’s a quarter of a million years old, although it’s only been an island for about 1,000 years.  Along with the nearby islands of Guernsey, Sark and Helm, Jersey was originally part of what we know now as France.  It is closer to France, than England, has an interesting and turbulent history.  I visited Guernsey, Sark and Helm as a child but we never made it to Jersey as it has always been relatively expensive.


In 1204, Jersey chose to pledge allegiance to King John of England, rather than France, and in a nutshell, that’s how it became part of Britain.  In return for their loyalty, Jersey was allowed to choose their own method of governance and set their own tax laws.  It is now a tax haven, a duty free port and the main industry is finance.  St. Helier is pictured below: 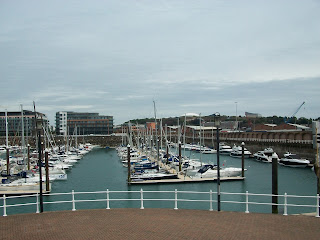 St Helier is the capital and takes its name from the Belgian monk, and hermit, Helier, although he was originally named Helibert .  Helier’s parents were pagans but he turned to Christianity allegedly after his childhood paralysis was cured by a Christian missionary.  The remains of his home, The Hermitage, can be seen next to Elizabeth Castle in St Helier.  During low tide, you can walk across to the castle or take the aqua-transport across.  The green and blue hues, that low tide brings, are absolutely beautiful, and not easily captured by my camera.  In A.D. 555, Helier had his head chopped off whilst praying, by marauders.  There are varying versions of who these marauders were:  Norman, Vikings or Saxons! 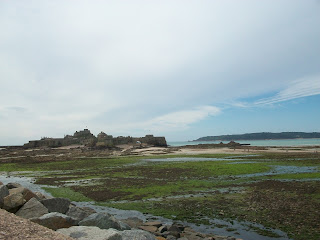 There is much to do in Jersey,  come rain or shine.  I was unlucky on this trip to encounter torrential rain for the first two days, but then the weather calmed and the sun came out for the last few days at the beach [St. Brelade’s Bay]. 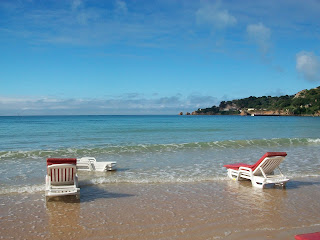 You can take an all island tour which always stops for a magnificent lunch along the way.  Look out for the ‘witches perch’ on the rooves of the houses.  The islanders used to be very superstitious, and didn’t want to be victims of misfortune, if they didn’t build a resting place for the witches as part of their homes.  Or if you want to split the day then take a two hour tour west and a separate two hour tour east.  You can also take day trips to the other islands, and St. Malo in France, which is 14 miles away from Jersey.  There’s a winery to visit and a new tour available since last year, is the Homes and Gardens all-day tour which takes in the Botanical Garden at Samares Manor and Gardens, and the Hamptonne Country Life Museum [pictured below]. 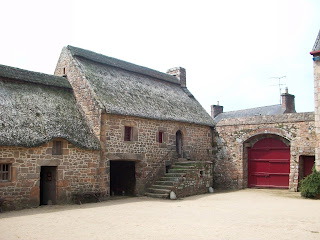 You can also take Le Petit Train from St. Helier to St. Aubin, which takes 30 minutes each way and has a really interesting commentary.  St. Aubin has several places to have lunch and you can take a later train back to St. Helier if you want to stay for lunch. 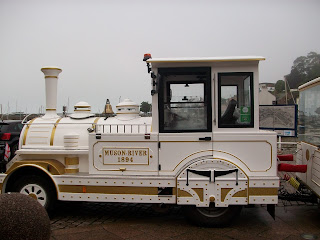 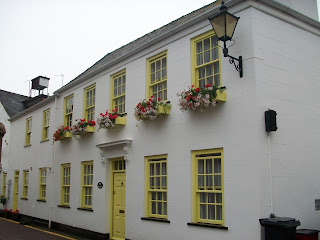 Jersey’s history is all around, and explains why most of the street names are in French, and why they have their own language [Jersey-French patois].  The patois came in very useful during the Nazi occupation [5 years during the Second World War] because the occupiers didn’t understand it.  The best way to get to know the history of the Nazi occupation, and the impact on the islands, is to spend a couple of hours at the Jersey War Tunnels.  Originally designed to be an underground hospital, it was never actually used as such.  ‘Slaves’ were brought to Jersey from Africa, Russia and the Ukraine etc to build the tunnels and many died in the process because they were treated abominably.


The Nazi occupation isn’t that well known outside of the Channel Islands, because the islanders didn’t want to speak about it for many years afterwards.  There is now an annual ceremony in Liberation Square to celebrate liberation, amongst other commemorations. 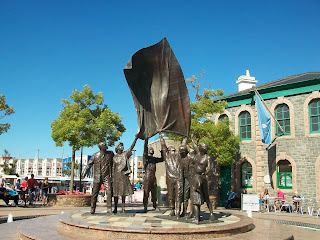 Winston Churchill left the islands defenceless at the start of the war, because he thought there would be a massacre.  As a consequence the islands experienced 5 years of hardship, until it became clear Germany were not going to win the war.  The locals were given 24 hours to evacuate.  Many travelled to England, for what they thought would be a few weeks, but ended up being away for 5 years.  Some changed their minds at the dock, and went home, to find their houses ransacked because it was thought they weren’t coming back.


St. Brelade’s Bay has become a favourite place of mine.  I never get tired of looking at the views.  There is a magnificent parish church perched on a cliff with a fabulous view of the beach.  It is one of the top beaches in Britain, and relatively unspoilt.  A couple of hundred years ago, the fishermen used to take communion at the church, before setting sail for the fishing grounds of Newfoundland.  The maritime history of the island is on display at the Maritime Museum in St. Helier. 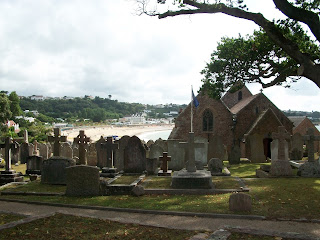 The highlight of Jersey’s year is the annual Battle of Flowers, which takes place the second Thursday of August.  I have yet to see this so it means a return trip I guess!  It first took place in 1902, to celebrate the Royal Coronation [King Edward VII and Queen Alexandra].  It is now one of the largest floral carnivals in Europe.  Lily Langtree, sometime actress, King Edwards’s mistress, was born here.  Judge Roy Bean named Langtry in Texas after Lily. 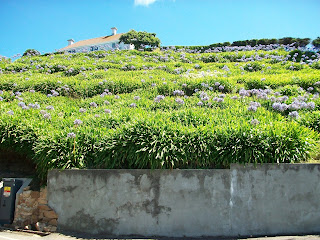 I can’t write about Jersey without mentioning the famous Jersey Cows, Jersey Royal Potatoes and knitting! 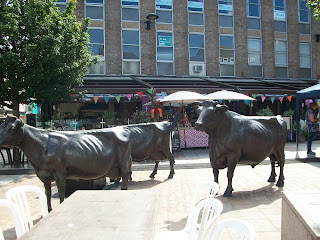 So, now I have mentioned them you will have to go find out for yourself.  I will just say that Jersey Royal Potatoes were allowed to use the ‘Royal’ label by Queen Victoria who thoroughly enjoyed her dinner one evening.  They were originally called ‘fluke’ potatoes.  There was a famine and a farmer had the idea of cutting a potato with 7 ‘eyes’ into 7 pieces and planted them.  Thus were born the Jersey Royals, which have a unique flavour, unless you are buying them in the supermarket.


Knitting was once a huge industry in Jersey.  In fact, Mary Queen of Scots went to her death in a pair of Jersey stockings.  The islanders became so enamoured by knitting that at one point they were banned because there was no-one to bring in the harvest!