I last travelled to New England 20 years ago, when I undertook a wonderful road trip with two friends to Vermont and New Hampshire in the fall [autumn].  I had always wanted to see the autumn leaves on the East Coast of the U.S.A, and a first for me was seeing the weather-protecting covered bridges.  I was lucky enough to be invited back very recently, this time to experience Rhode Island and Maine.  This was a trip of ‘firsts’ for me.  As always, I don’t give too much away – just enough to inspire the intrepid traveller.


I flew from London’s Heathrow Airport to Newark, New Jersey.  I was a tad nervous as it’s been many years since I had visited the U.S. and had always experienced surliness from U.S. immigration officials.  I need not have worried.  The journey over was as smooth as it could be.  I flew Virgin Atlantic, who had upgrades on offer at check-in.  I upgraded to premium economy just because I could and it was well worth the extra money.  I have never experienced such a smooth transition through immigration and customs, with NO surliness and checked bags available almost immediately for collection at the carousel.  I had booked the Hampton Inn, Spring Street, for an overnight stay and the courtesy bus turned up right on time.  The airport staff are very organised, and helpful, on-hand for any questions.


After a good night’s sleep, I headed out to Hartford, Connecticut where my buddy collected me, whilst waiting for another friend to jet-in from within the U.S.A.  However, my flight from Newark to Hartford was delayed for one hour.  President Obama just happened to fly into Newark as we were about to depart, so we had to wait for the helicopters to pick him and his entourage up.  Obama was flying to Rutgars University, to give a speech.  We had to stay on the aircraft but were allowed to go to the aircraft steps to view Airforce One – this was a real first for me and it was amazing to see the blue-coned aircraft parked out on the runway.  The United Express flight attendant was a bit inappropriate, however, as one Jewish man kept getting up to view the aircraft and take photos.  She jokingly asked him ‘why are you so interested, are you a terrorist?’  It was meant to be a joke but it didn’t go down too well considering the climate we are in right now.  If a passenger had made such a joke he/she would have been arrested!


Our first excursion was to Newport, Rhode Island, which was a couple of hours drive away.  Hartford, itself, has a long and interesting history but I will leave that for you to explore yourself.


The New England coast is one of the prettiest in the world, and so unspoilt, despite mass tourism during the U.S. summer months:  New England, old charm, unique.  Newport, Rhode Island, is famous for its Newport mansions where the rich and famous had fabulous mansions [‘cottages’], for summer vacations, along the cliff walk which is gorgeous [during ‘the ‘Gilded Age’].  ‘The Breakers’ is the most famous mansion [built for the Vanderbilts], but unfortunately it was closed for ‘CBS News’ when we were there, so we couldn’t explore.  Never did quite figure out what CBS News was doing there.  However, walking around the mansions, in their magnificent locale was satisfying in itself.  When open, one can take a paying tour around the mansions. 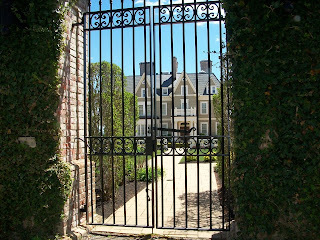 We found a wonderful lunch-stop:  The White Horse Inn (circa 1673) – the oldest tavern in America – recommended by the local dentist!:  great food, great atmosphere and not at all expensive.  Photo below. 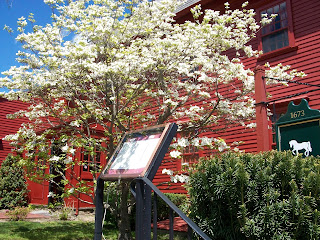 Our second excursion took us for a 2 night stay at Bar Harbor, Maine.  This was a much longer drive but so worth the trip.  We stayed at the wonderful Bar Harbor Manor Hotel [photo below], which has become one of my most favourite hotels ever.  I couldn’t stop taking photographs.  It is centrally located, and has a quaint smoking area outside the rooms but within the complex.  It’s a very short walk down to the water’s edge, and we experienced a magnificent sunset over the harbour one evening. 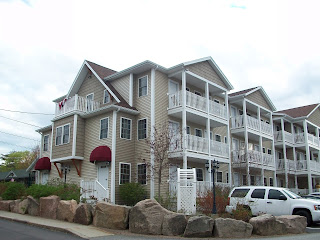 Bar Harbor is home to Cadillac Mountain, the highest point within 25 miles of the Eastern coastline.  It apparently is the first area that one can view the sunrise in America.  Cadillac Mountain is set within Acadia National Park, on Mount Desert Island, which has one of the most unique rock formations I have ever seen. 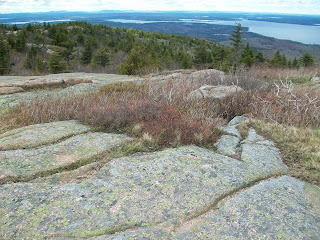 Cruise ships dock in the harbour from May through October, with most arriving in September.  Bar Harbor is rich in history.  By 1880 it was already a tourist destination and the summer vacation home to many wealthy, famous Americans like the Rockefellers. 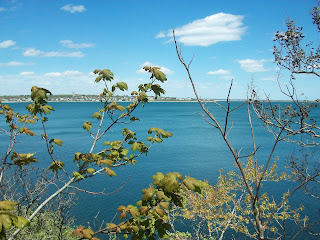 We dined [and lunched, we liked so much!] at The Thirsty Whale bar and restaurant, where I experienced my first clam chowder – delicious!  We revisited the Acadia National Park, which has many beautiful sights such as Sand Beach [where the movie ‘The Cider House Rules’ with Michael Caine, was partially filmed’.  A walk around the park takes about an hour, but a slow hike takes around 3 hours.  Below is Sand Beach which is part of the national park. 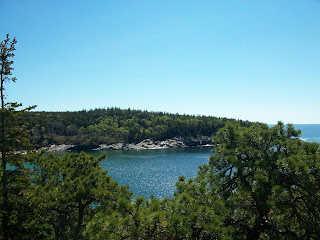 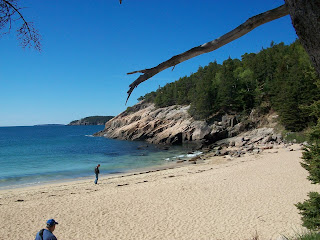 One evening, I was privileged to be invited to a lobster dinner party at a close relative’s home of one of my buddies.  This was an amazing experience, with our hosts who were warm and friendly, and took us on a brief tour of North East Harbor, a truly beautiful spot.  New England homes are so quaint and beautiful and I have often thoughts of converting my bleak apartment to New England style but it wouldn’t look so great in grey London!  One needs the special light that the New England coast offers to make it look really good.


This was another first, as I have never had Maine lobster before and a kind dinner companion helped me figure out how to eat it!  It was really delicious, although rich and filling, and followed by homemade blueberry/raspberry pie with ice cream which was also lovely.  I rolled out into the car afterwards I was so full! 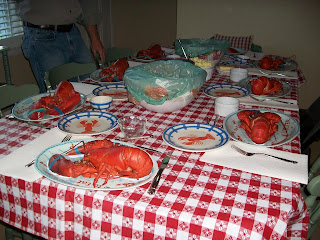 My buddy and I walked off our large meal by taking a walk along the Bar Harbor coastline [and stopped for a bit of shopping on the way].


I am so enamoured by New England, that one day I hope to return, perhaps next year.  I have visited Boston twice before, but next time I want to fly into Boston and go to Cape Cod, Martha’s Vineyard and Salem.  Why?  You will have google these places to see the attractions.  I grew up reading books that included references to these places and our recent itinerary, so this whole trip was a dream come true.


As the travel quote at the top of the page says:  ‘Life is not meant to be lived in one place’!   Thanks to my buddies and their relatives for a ‘top trip’, and to the people of Maine!  I travelled in May, so it was a bit cool and windy in Connecticut but by the time we got to Maine, the clothes layers were shed as it warmed up.


The flight back from Hartford to Newark was trouble-free, and only took about 10 minutes to get through security.  I was a bit worried about the connection to JFK International Airport, but managed to get booked on a direct bus shuttle transfer to JFK for 31 dollars, without having to change buses.  It was a bit ‘up close and personal’ and extremely hot, but only took 45 minutes so was very smooth and quick.


After spending some time airside at the bar, the trip back to London also went smoothly.  Now I am home, and am reminiscing with great memories and fabulous photos.  Happy Travels!