Who was it who said 'it is sometimes better to travel hopefully, than to arrive' ?  Well initially that was certainly true of my recent trip to Tunisia.  I booked an all-inclusive (flight, hotel and full board) on the British Airways website.  It must have been about 20 years since I had first visited and I wasn't overly impressed - hence, the long delay in going back.  But heck I figured it must have improved since then so I hopefully boarded my British Airways flight from London's Gatwick Airport, looking forward to getting away from the coldest March in my living memory in Britain, off to some sun, cous-cous and relaxation.  Actually I don't like cous-cous but what's a cous-cous between friends!

All started well as the flight is only just under 3 hours and I set off smiling as this was a cheap, cheap trip which I booked using 'hic and clic' (2 glasses of red wine and hey ho off I go as I click the 'book it' button!).  Tunisia has had some troubles in recent years hence it is not currently an expensive country to visit, although there are border controls between Tunis and Monastir.  More of that later.

The trouble started on landing at Tunis airport which was surprisingly modern.  As I winged my way trouble-free through immigration and customs I found nobody waiting for me to collect me for my transfer to Monastir down south.  I had pre-booked my transfer on a 'hopper bus' through a UK provider as the holiday package didn't include transfers.  I was informed it was a mere 2 hours hop, skip and a jump on the hopper bus to Monastir and it only cost 17 pounds for a roundtrip.  However, after accosting (verbally) a man at the information desk who couldn't speak English, asking him if he was my 'transfer', his buddy jumped in and said to me 'hotel Delphin?'.  Ah I thought - here is my transfer - I asked him if he had my name down (since he seemed to know where I was staying although goodness knows how he guessed - must have 'Delphin' written all over me - must be a typical Delphin guest!) - he said 'no names'.  Okay, 'no names', this is a good start.  He asked me wait by the doors so he could gather the other random travellers to which I obeyed.  So far so good.

20 minutes later about 20 of us were gathered, including man, woman, babies, children (but no dogs thank goodness) and we all piled across the car park to the hopper bus.  Our hearts sank.  Our hearts sank deeply - how could this pile of machinary which looked like it could barely stand get us to our destination(s) we thought to ourselves.  We were right to query it because lo and behold we boarded the bus in reverse hotel destination order with our own bags.  That is, I boarded first because I was staying at the last destination, but the driver stopped me and said 'wait'.  He then proceeded to open a window in the bus and invited me to lift my bag through the window!  I could hardly lift my suitcase let alone get it through the window on my own.  I took it in through the bus door and he was none to pleased and stuck it at the back of the bus.  In dribs and drabs the rest of the group boarded and THEY had to put their bags through the window - I have never seen anything like it!  The group had enormous suitcases and after lots of huffing and puffing we finally got all the bags piled on top of each down the back!

We breathlessly sat back and started to relax for the TWO HOUR (note I say TWO HOUR) trip - ha !  Not so fast, 'I need 3 men' said the driver.  'What we said?' and he repeated.  'Why?' we said - well of course 'I need 3 men to help me push the bus'!  'WHAT??' we said.  Of course we thought he was joking but 20 minutes later we realised he wasn't joking and 3 guys had to get off the bus and help push it while he started the engine.  Then they had to run to the door and hop in and finally we were off!

We thought it couldn't get any worse but to spare you all the details all I will say is that FOUR HOURS later, and one border check between Sousse and Monastir, when I thought I was going to be kidnapped and have all sorts of horrible things done to me (imagination running riot), I finally arrived at my destination of Monastir, having dropped the others guests off at their hotels in Hammamat and Sousse.  The drivers changed half way through and the driver that took me to Monastir got really upset at 11.30pm when I wouldn't stop for a coffee with him - well I was exhausted and just wanted to get to my destination.  He wasn't impressed and when I got to Monastir at midnight he refused to help me with my suitcase and went off in a huff.  Him that is.

Anyway I had read some horrendous stories about the hotel Delphin El Habib but actually it was absolutely fine.  The receptionist was very sweet and offered to send food up to my room despite the late hour, and gave me a lovely seaview room (smoking of course) with a little balcony - great view of the sea and the marina.  Monastir is a hot tourist destination for Brits but it wasn't busy except with local tourists as it was Tunisian Easter Holidays. 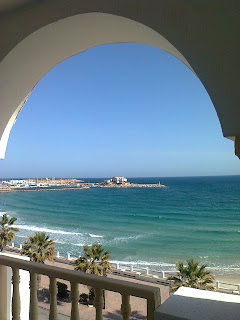 The food has some poor write-ups but was absolutely fine, although the pool area could do with a bit of brushing up.  For a few days though, it was great - very relaxing, the staff were very pleasant once they got to know you and they even let me have lunch on the last day and free drinks from the bar even though I had checked out, whilst I waited for my transfer back to Tunis.  This time I decided to forgo the 'scenic route' and booked a private car transfer (for 50 pounds !) - it was bliss, took 2 hours and went like a dream.  The hotel rep was fabulous as I booked a half day tour with him - a pirate ship cruise with a 'snack' thrown in (which turned out to be a delicious freshly-cooked lunch - chicken, whole mackeral, salad and bread) - and he did a deal with me because of my hopper bus transfer experience and gave me the private transfer for half price! 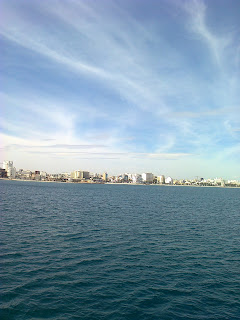 If you are into being 'entertained' at the pool, the 'animations team', as they are called are fabulous - very friendly, encouraging everyone to get involved with 'gangam stylie' dancing, water polo, aerobics etc and they are great with children.  But they leave you alone if you are not interested and don't hassle you too much.

There are some really good excursions to do, such as a 2 day Sahara trip which takes you to Carthage and Tunis, but I had already seen Carthage on my previous trip so I gave it a miss this time.

The one thing to watch is currency.  Tunisian dinar are 'restricted' which means you can't change your money before you get there and you must change it back at the airport before you leave.  For tours and often in shops, the locals take British Pounds or Euros because the country needs 'hard currency'.  I came back with 80 dinars which are useless as I can't change them back into pounds but hey that means I have to return to Tunisia right ?!!

All in all this was a good trip, despite the outbound transfer disaster but lessons were learned, and it was very inexpensive.  The weather was typical desert weather for this time of year - between 25 - 30 degrees for 5-6 hours during the day and quite cold and windy at night so this time of year, it's best to take a mixture of clothing.

Tunisia has a fascinating history and is probably most famous for the ancient ruins of Carthage, a UNESCO World Heritage site, which was founded in 814 B.C.  The primary language is Arabic, with French as a second language - I didn't find that English was widely spoken but my smattering of schoolgirl French got me through okay.

Travel hopefully and you will enjoy!