“For my part, I travel not to go anywhere, but to go. I travel for travel’s sake. The great affair is to move.” – Robert Louis Stevenson This quote is so true for me, but I also travel for weddings and that’s how I ended up going to Mauritius in 2010, both en route to, and returning from, a wedding.
I had wanted to go to Mauritius for many years – ever since I did, believe it or not, a leadership/management course at work.  We were informed on this course that Mauritius was the most harmonious, multi-cultural country in the world at that time (the early 1990s), where cultures lived together with no conflict, nor, strife.  I must admit I found this fascinating and wondered if this was a land ‘over the rainbow’ or did it really exist.  One day I must go.
Since I was travelling to New Zealand for a cousin’s wedding, I decided to go via Australia, and return to the UK via Mauritius.  A colleague invited me to her wedding in Mauritius so of course I seized the opportunity (being a ‘wedding kinda gal’).

I flew out from London’s Heathrow on Air Mauritius (not recommended) and had 10 hours to kill in Mauritius before flying on to Sydney to spend a couple of days.  I then flew to Auckland to attend my cousin’s wedding at Christian Bay, North Island (a first for me – a wedding on a beach, which was wonderful!). 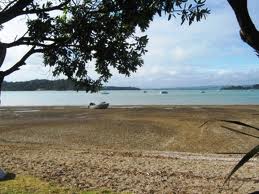 After a few days in Auckland I then flew via Brisbane and Perth to Mauritius, this time for a longer stay of around 5 days.  Unfortunately, it had been many years since I had been to Perth airport and didn’t realise I would have to transfer from a domestic terminal to the international terminal.  I had no clue how to transfer and no local currency to take a taxi.  However, as luck would have it I managed to accost a local airport employee to help me make the transfer and figure out how to get to the international terminal, by taking a local inter-terminal bus which didn’t cost me anything.  I only made my flight by a whisker.  Several hours later, I arrived in Mauritius for a one hour transfer to my hotel in Grand Baie, located in the north-west of the island. 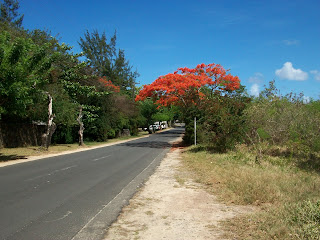 The hotel was really busy so I was given a family room (it was huge!) as it was the only one available.  I was very comfortable for one night until I spotted a long army of ants traversing across the lounge-room wall – this is very odd I thought – I can’t live with armies of ants! 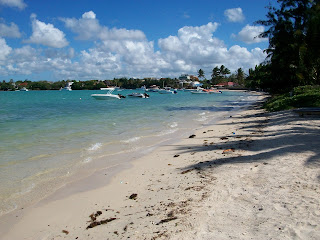 The hotel, however, was great, and moved me immediately by upgrading me to a beach villa! 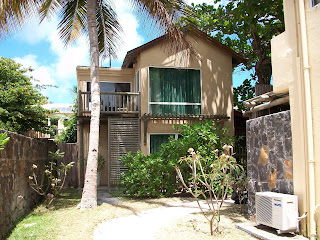 I had a sublime 5 days staying here although it cost me 50 pounds each way by taxi to get to the wedding venue.  I drove through the capital Port Louis both out and back and was unimpressed, however, this probably isn’t a fair view since I didn’t stop and explore the city.  I didn’t really have time to sightsee and like lots of countries Mauritius has an interesting colonisation history – colonised first by the Dutch, then the French and then the British.  Mauritius achieved its independence in 1968. 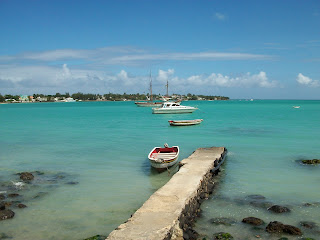 One of the most famous inhabitants of the ‘Isle de France’ as it used to be called, is probably the Dodo which is now extinct (the Dutch were held responsible), hence the expression, ‘as dead as a Dodo’. 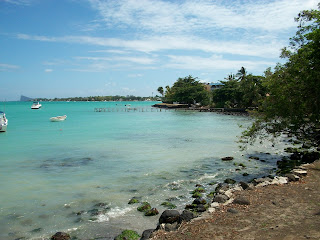 I can’t vouch for the harmonious multi -culturalism, but I can vouch for the sheer beauty of the coastal areas – truly picture-postcard perfect.  The only problem was the wind – I asked a hotel employee at the hotel I stayed at near the airport (in the east), the night before I left, if it was always windy in the north-west and the answer was YES.  I don’t do wind very well – messes up the hair!  However, it wasn’t windy at this airport hotel and although it was only 10 minutes from the airport, it was in a truly spectacular location. 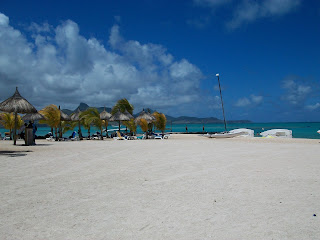 I highly recommend Mauritius as a travel destination just for travel’s sake – thanks Robert Louis Stevenson for that thought!